Because Spirometry requires a maximum cooperation from the subject, and anything less than maximum can result in an invalid test or a false negative or positive, wouldn’t it be useful if there were a mechanism available to help you, the technician, determine the type of cooperation to expect from any given subject? Such a mechanism would in turn allow you to adopt an appropriate attitude and tailor the test instructions to better meet the subject’s needs.

The first step in developing this mechanism was to examine the scope of problems encountered by technicians while testing. This was accomplished by reviewing 6897 Spirometry records collected over a 21 month period at a large corporation. Attending technicians and nurses were encouraged to enter personal comments into each record concerning the degree of cooperation achieved during the test and their perception of the test quality. All of the medical professionals performing the Spirometry tests had undergone NIOSH approved Spirometry training and followed strict written Standard Operating Procedure guidelines which were developed by the company to govern the test quality.

A review of all comments revealed that of the 6897 records 432 subjects (6.3%) had qualifying comments that included reasons why the test was either not done at all, not completed or done incorrectly, as well as any observable subject attitudes which may have accounted for the problems. An examination of the reported comments demonstrated two factors to be operative. The first was motivation, or willingness to follow test instructions; the second was comprehension, or the ability to follow test instructions.

The following figure shows how a quadrant can be formed using Comprehension as the vertical scale and Motivation as the horizontal scale. Four classifications are possible using this approach, acknowledging the fact that there may be varying degrees of homogeneity within each group. Subjects falling into the high motivation-comprehension quadrant (93.7% of the total group) were those who produced an acceptable test record with routine instruction and guidance from the technician. These subjects were labeled Spiro-competents. The remaining group of 432 people were distributed between the other three quadrants. Those in the high motivation-low comprehension quadrant were called Spiro-incompetents, because they tried hard but were unable to produce an acceptable effort without a great deal of effort on the part of the technician and many repeated tests. 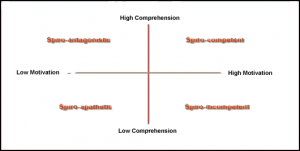 Spiro-apathetics were those with low motivation and low comprehension. They did not want to be bothered to do the test and made little attempt to understand or follow directions. Spiro-antagonistics, on the other hand, were high in comprehension and quite capable of producing an acceptable test, but low in motivation. They exhibited overt hostility to performing the test either due to an anti-management stance or fear of test results. Regardless of the reason, they refused either to perform the test or to follow directions, thereby producing unacceptable test data.

The following table distributes the reasons for test failure as observed in the nurses’ comments and the appropriate corresponding quadrant.

Learning to deal with all types of subjects of various levels of motivation and comprehension is a learned skill that is equally as important to the technician as knowing how to perform the test correctly. Once technicians can gauge the cooperation which can be expected from a subject, they can adjust their test instruction presentation and thereby enhance the chances of obtaining a successful test. This assessment mechanism helps the technician take the appropriate approach based on subject behavior and attitude for this highly stimulus-response oriented test.